Walking into the Okains Bay Maori and Colonial Museum Banks Peninsula, it’s hard not to feel the urge to salute the mighty totara tree, once so abundant on Banks Peninsula, and now remembered as waka (canoe), or fence post or roof shingles or tiles.

The Okains Bay Museum offers a unique collection of taonga Māori or treasures in Māori culture including an impressive display of adze blades shaped from pounamu (greenstone) and basalt and formed by the slow rubbing with sandstone. There are Patu and Wahaika, weapons made from the jaw bones of sperm whales or finely carved wood. A mortar and pestle fashioned from local volcanic rock. Intricate fish hooks and elaborate āruke koura (crayfish pots) and hīnaki (eel traps). Carved wooden nose flutes for making music.

The Waka Shed features a number of totara waka, some built more recently by Museum founder, the late Murray Thacker.

Totara was the preferred timber for waka as the totara’s high levels of natural oils help prevent it from rotting or splitting. In the old days, it would take several weeks to fell a totara destined to become a waka. The hull was then carved out using fire and hand adzes. The waka could weigh 3–4 tonnes and to move it, smaller logs were used as skids and rollers with ropes made of raupo (bullrush). It could take over a year to construct a waka but once finished it could last for decades.

At the museum, there is a collection of old buildings.

A Blacksmith shop with below and so much equipment. A settler’s slab cottage made or totara and with totara shingles for the roof, Pātaka (storehouse) made from totara milled at Okains Bay, the Whakaata (meeting house) with Tukutuku panels.

In the Colonial Hall includes a whaling and shipping artifacts as well as items from the home kitchen: irons made of solid iron, washing machines, crockery and shoes. We also found a dress that June Hay had donated to the Museum. It have been given to her by Essie (Thacker) Danks who was born in Okains but spent much of her married life in Pigeon Bay. 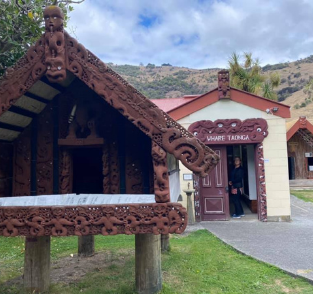 The Pātaka (storehouse) made from totara milled at Okains Bay and the Whakaata (meeting house) with Tukutuku panels. 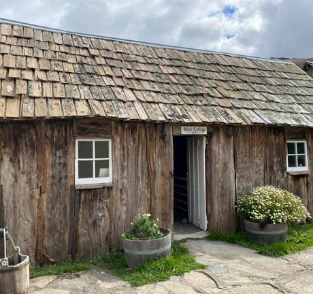 Totara Slab Cottage with totara shingles for the roof. 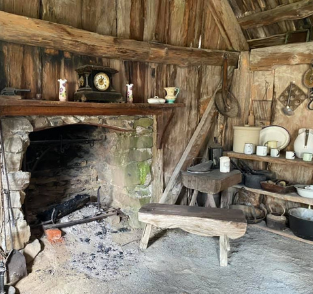 Inside the totara cottage you can see the old totara beams that still give structure to the building after 150 years. 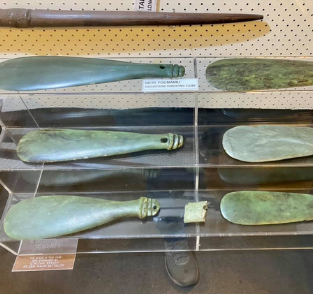 Mere made from pounamu (greenstone). 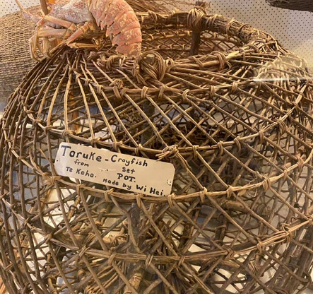 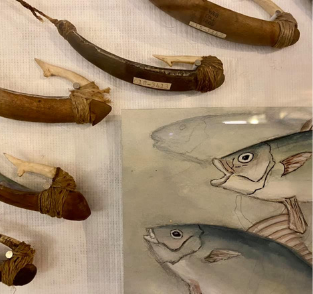 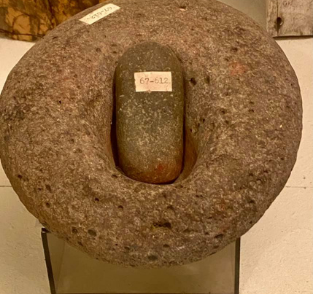 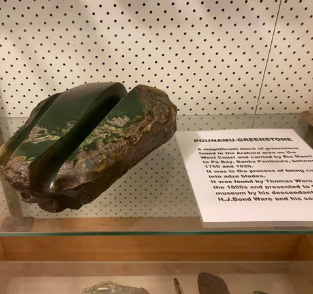 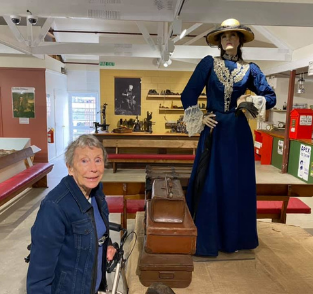 June Hay, from Pigeon Bay, in the Colonial Hall, admiring her dress from Essie Danks (nee Thacker) who was born in Okains Bay. Now the dress is returned. 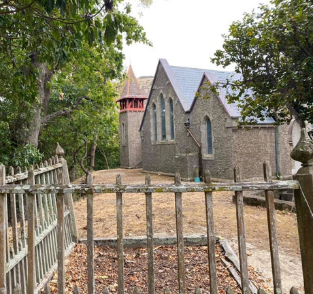 Driving out of Okains Bay, you can take an alternative route to Little Akaloa via Chorlton. You drive along the coast. This photo is the celebrated Little Akaloa Church with spectacular carvings inside. Here we can see the turret with totara shingles and in the foreground a totara fence making a grave.