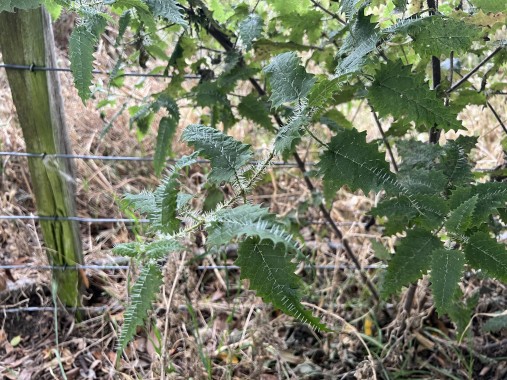 Tales of Summer 2022 - A series of Celia Hay’s stories from the South Island.

Ongaonga (Urtica ferox or stinging nettle) is an ever present threat in many parts of New Zealand. A light brush on your leg or arm with the  nettle can leave a tingling sensation that may persist for 24 hours.

Ongaonga has been linked to unexplained deaths of people walking through a dense patch and being overcome. With this mind, I decided to have a go cutting back a particularly annoying patch on our main track to the paddock we call, Waterses. 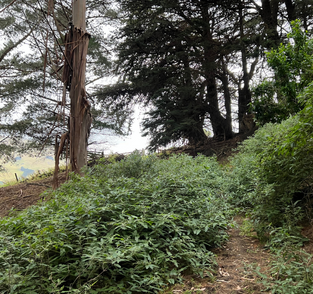 The Ongaonga bushes were above and below the track so I had to form a strategy so that I would safe. I found a large set of old tree branch loppers (giant secateurs) in the shed and then opted to take a piece of cloth, that used to cover our cool display cabinet in my old café.

I wore gloves, a hat, jacket zipped up to cover my face in 20+°C and attacked the nettles. It took a few sessions particularly as I was getting hot, sweaty and impatient and recognised that if I was careless, I would just get stung.It is a 20 minute walk up hill to the nettles. Once there I found a useful broken branch to help direct my cloth as it weighed down the Ongaonga. This enabled me to access the lower branches near the ground.

The path is now clear however, the Ongaonga will inevitably grow back but it will take a number of years for it to block the track again.