Over the holiday season of January 2022, I was very fortunate to have an extended break at our farm in Pigeon Bay, Banks Peninsula and felt so inspired about this time that I have prepared a seriese of stories. 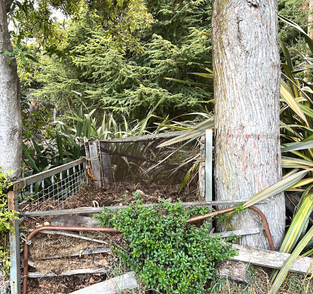 Flanked by totara and pittosporum, our compost corner was constructed of old metal bed frames some years ago by June Hay. It sits at the back of the garden, quietly fermenting. But in a hot, dry summer like this, I had to give it regular douses of water to hydrate the compost and keep the bacteria on track.

From grass cuttings to our vegetable and food waste, to garden trimmings, these break down over time and are returned to renew the garden. Easy and effective.

Gates to the drive

Each summer we enjoy the challenge of a new painting project. A few years ago, over two summers we painted the weatherboards on our house, another summer we painted the carport and shed at the back of the house. This year, Alice and I headed down the drive to the main entrance to rejuvenate the gates and wooden fence. 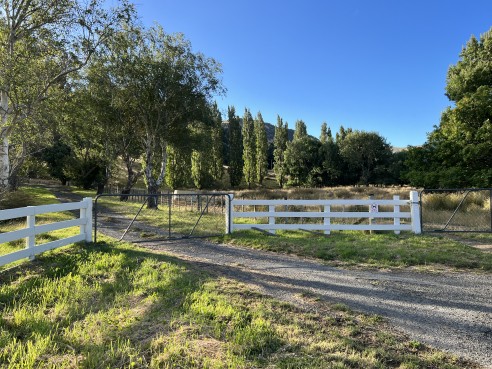 I am pretty sure that the last time they were painted was around 1996, the year that my son Daniel was born and we swapped houses with my parents-in-law, June and Donald Hay.

I remember noticing Donald painting them one day, not much pre-painting preparation, just a good covering of paint. As I worked through the washing, scraping, and sanding of 2 mesh iron gates and 2 wooden fences both of around 4 meters and 2 letterboxes, I thought a lot about Donald. 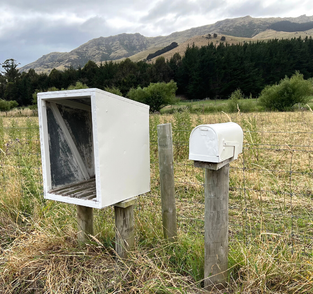 Letter box: if we put up the flag on the side of the letter box, the driver will stop to pick up mail.

Donald Hay was a member of the 4th generation of farmers of this property and because of the proximity to the sea, he was an expert sailor. Donald had over 13 yachts and launches during his long life and was also a great fisherman, cleaning and filleting the fish from the boat shed. Donald was not really a home handyman so the previous paint job was pretty rough.

This gate included on the totara post about 250mm in diameter. I debated as to whether I should paint this or strip it back completely so we could admire the grain of the timber. The totara post would have been felled on the property more than 100 years ago. I was advised however to paint it as this would extend its life. So I did.

The fences and gates are finished now but don’t look too closely… it's still a pretty rough job but looks fine from a distance...

Birds on the farm 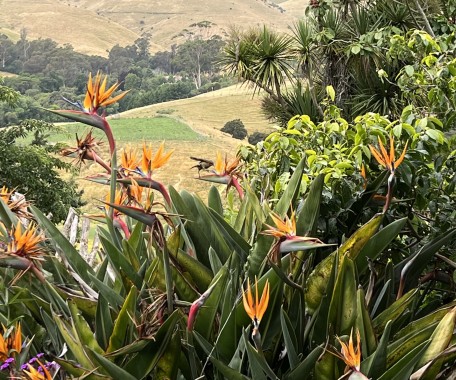 If you look closely in the bushes above, you can see the green olive shaded feathers of the Korimako or bellbird, dipping its beak into the Bird of Paradise flower, to drink the nectar. The distinctive birdsong of the korimako is easy to recognize and the melody greets us around the house as well as up the hill and in the bush. It's a very welcoming tune. 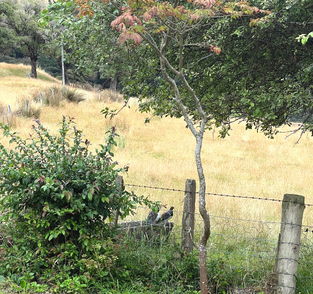 Our bay is named after the Kereru or New Zealand Pigeon whose beating wings when in flight, alert the listener to its presence. In January, the kereru were frequently around the house, hanging out in the kowhai trees and enjoying the warm weather.

Reliable, clean supply of water is an issue for everyone and at Inveralloch we draw water from natural springs high up the hills as well as from a creek system.

The photo above shows the complex web of fences, pipes, barrels, troughs, and tanks that reticulates water around the farm. Oliver has introduced this APP that allows us to use GPS technology to update and plot issues in real-time and with good accuracy as long as you have data on your phone.

There are always issues with our water system and it requires regular checking and maintenance. Oliver, with the help of Alice, and sometimes Daniel, has been replacing old ballcocks, taps, and fittings to improve the reliability of the system. It is arduous work as we no longer have a quad bike and need to hike the gear up the hill to where ever the work needs to be done. 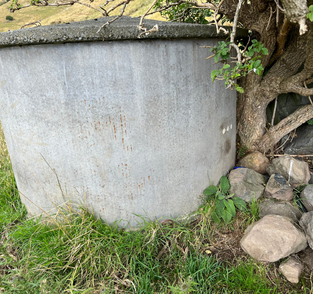 Checking the house water tank. This tank dates from the 1960s and is part of our house water system and takes 45 minutes to walk to. 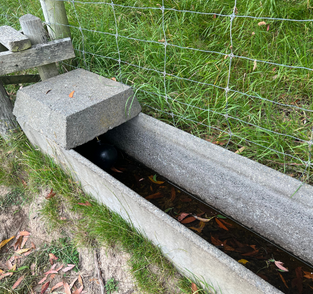 No water in trough.

This is an example of a trough without water...meaning that the water system has failed somewhere along the line. Sometimes the cattle or sheep knock out a fitting, other times, the water pressure is so great that it blows a fitting; sometimes the pipes just leak...there are many variables and always something needing attention. 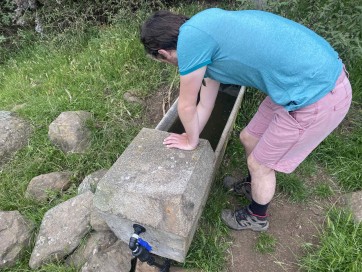 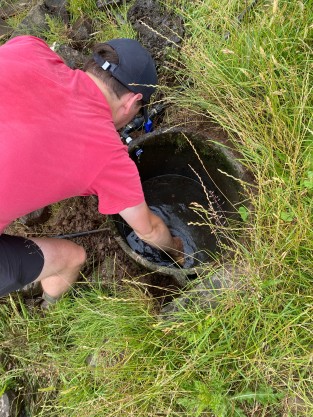 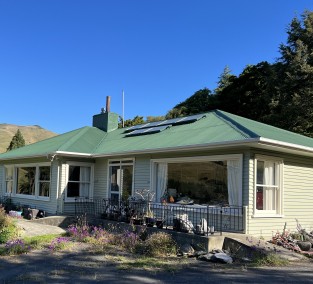 Usually, we have to turn on the electricity to top up the solar but during this sunny period, the thermometer has regularly clocked over 65°C.

We have enjoyed some delicious evening meals with lots of summer vegetables and fresh greens and herbs from the garden. 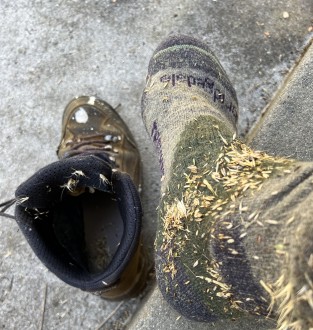 Socks and boots covered with grass seeds. And these seeds have to be hand-pulled from the socks, one by one, while enjoying a nice glass of wine. 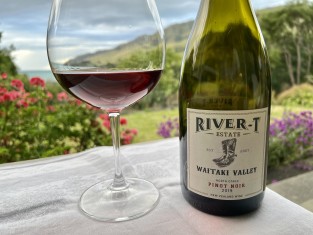